In honor of International Women’s Day on 8 March, we spoke with some of the women who work with the Arctic Council to learn more about them, what it means to be a woman in their field and their advice for young women. 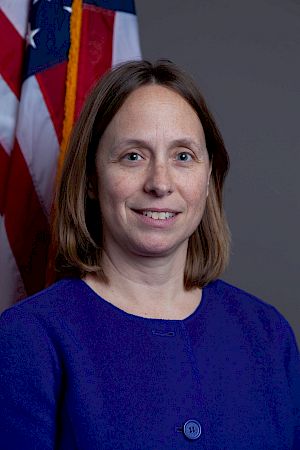 Meredith Rubin is the United States’ Senior Arctic Official. We spoke with Meredith about the critical intersection of science and policy making, how differing perspectives can aid personal growth and her advice for young women to not sell themselves short and to push their passions forward.

Can you tell us about yourself, your education and your current role?

I am the United States’ Senior Arctic Official for the Arctic Council. I work for the Department of State as a Foreign Service Officer, where I represent the U.S. at home and abroad. I have served in several embassies, and I have focused predominately on economic issues throughout my career.

In terms of education, I have a master’s degree from George Washington University in security policy studies. I received my bachelor’s in government and Russian from the University of Notre Dame in my hometown of South Bend, Indiana.

What motivated you to pursue a career in government affairs?

In many ways it was a natural progression for me. I served as a Peace Corps volunteer, and it was just such an important, impactful experience. I really enjoyed working, traveling and living abroad, and working with other people to help improve various situations. During my time in the Peace Corps I taught English in Ukraine, and when I came back to the U.S. I wondered, what can I do to help build upon that experience? I ended up in the State Department, which has been a great match for some of those interests and some of my background.

How did you first become interested in the work of the Arctic Council?

I first became interested in the work of the Arctic Council when I worked at the U.S. Embassy in Reykjavik, Iceland. I was there for three years, and at the time, I did not know a lot about the Arctic Council. However, there were State Department officials coming to Reykjavik to help negotiate the 2011 search and rescue agreement negotiated under the auspices of the Arctic Council, and part of my responsibilities in Reykjavik was to support that delegation from the US. It was so fascinating from a multilateral level – the significance of the agreement and what they were working towards. Of course, just living in Iceland really spurred my interest as well and learning about the issues that impacted the country and our relationship with them in those areas. That, combined with the opportunity and exposure to the Arctic Council, got me very interested and quite excited about the work.

What do you enjoy most about your work?

Definitely the people. I think it is very inspiring that everybody approaches different issues from their own perspectives and with their own priorities. But we all have an important perspective, and there are ways to find common ground, which is an important aspect of the Arctic Council. I love that passion and the approach that different people take to various issues. It helps add perspective on how I can engage and grow myself. It is great exposure to so many different ways of thinking and doing.

What role does science play in government decision making?

The Arctic Council gives a very helpful perspective on the interaction between science and policy. In a lot of situations, the connections between science and policy are not always clear. However, certainly within the Arctic Council you can see a clear connection. The Arctic Council’s work and how it is structured with the Working Groups and the Senior Arctic Officials – and how we all work together to translate that important scientific work into policy and to help inform decisions – is really remarkable. It also goes beyond the Arctic Council – we have hundreds of people in our Bureau (the State Department’s Bureau of Oceans, and International Environmental and Scientific Affairs) who do this on a daily basis. We work with some incredibly complicated issues to figure out how we can use scientific information to effect change. I do not think many people underestimate the importance of informed decisions, and science is at the heart of that.

Who is your role model, and why?

In my job we move around often, so it is hard to pick just one person out of all the people I have encountered. I would say my role model is a group – the women that are in the Foreign Service at the State Department. They are very smart, strong and inspiring. To see how some of those women engage and demonstrate respect and professionalism is really inspiring. Having that support has made a big difference in my career.

What do you think are current challenges and opportunities for women in government roles?

In my experience it is making sure that women have equal opportunities and access during every step of their career. That is something that we are still working on, but we have had some very strong females within the Foreign Service that have demonstrated that it can be done, and they are supporting others to have that same success.

What do you think needs to be done to increase representation of women in government roles?

Governments need to put women forward. I think there are plenty of capable women for any position. But it must be a conscious choice by those decision makers to move them forward, and we need to see more of that.

What advice do you have for young women who are interested in pursuing a career in government roles?

Keep at it. Put yourself forward. Give yourself opportunities, and do not underestimate your abilities or sell yourself short. Do not self-censor yourself and think that you should hold back. If it is something you are passionate about, put it forward. I had a former ambassador that I worked for in the Foreign Service who had said to not take the job that you think is the right one for your career development if it is not what you really feel attached to do. Do what calls out to you. Do what is meaningful for you because then you will have a more genuine and valuable contribution, and you will be more productive as a result. I have tried to do that throughout my career, and I think that others should as well. It might not be the most popular or glamorous work, or the easiest to break into, but if you truly have the desire, you will put yourself out there and do your best to make it happen.